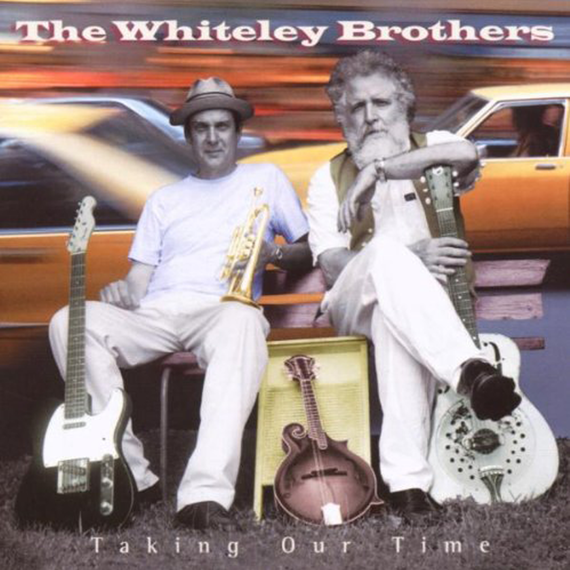 The Whiteley Brothers – Taking Our Time

The Whiteley Brothers can do it all, and they prove that on their latest album Taking Our Time. Picking up where their previous album Sixteen Shades of Blue left off, Taking Our Time is filled with more original blues from two of the finest blues musicians performing today. But the most remarkable aspect of Taking Our Time is that the the two brothers perform every single note on the CD, playing more than twenty instruments and singing all the vocals. Steeped in the traditions of blues, jazz, swing, gospel, r&b, and folk, Chris and Ken have been fixtures on the Canadian music scene since the 1960’s. They have appeared on more than one hundred and fifty recordings between them, and are continually in demand as performers, session musicians, songwriters, and producers. They have worked with the likes of John Hammond Jr., Leon Redbone, Blind John Davis, and in 1993 were the first Canadian act ever invited to the prestigious Chicago Blues Festival. Very few people could record a project like Taking Our Time. Chris and Ken Whiteley composed, wrote, played, sang, and produced every note you hear. Strings, percussion, keyboards, wind, and voices. Each piece is produced lovingly, with respect for the song. From the Dixieland strains of “I Don’t Mind” to the rocking John Lee Hooker-style of “Shufflin’ and Shaggin’,” The Whiteley Brothers show their respect for and intimate knowledge of the many styles that make up the blues idiom. With delta country blues (“Saskatchewan Blues,”), jazzy ballads (“Perfume and Tobacco”) inspirational sing-alongs (“On this Journey,”), and more, Taking Our Time is an album that will stand up to repeated listening. The Whiteley Brothers have provided us with a glimpse of the past, present, and future in this wonderful recording. Slow down and listen to Taking Our Time. “Looking For The Blues,” “I’ll Be Looking For You” and “Stranger in Your Home” are among the very best new songs I’ve heard anywhere.-John Valentyn, MapleBlues Newsletter. Musicians: Chris Whiteley (lead vocals, harmony vocals, acoustic guitar, electric guitar, trumpet, cornet, harmonica, drum, washboard, feet). Ken Whiteley (lead vocals, harmony vocals, acoustic guitars, electric guitar, 12-string guitar, piano, mandolin, string bass, electric bass, banjos, washtub bass, jug, drums, washboard, shaker)
Produced by: Chris and Ken Whiteley